It was during the 1960’ and 70’s that several bulls bred at Douneside by Lady MacRobert’s Special Trust were used in the Achnacloich Fold. These were: Loachlan Ruadh of Douneside (5800), Aplin of Douneside (5854), Uisdean Mor of Douneside (5683), and Gille–A–Gleann of Douneside (6047) and it could be said that these bulls had a mixed influence on the Fold.

Fortunately the value of Highland Cattle was starting to show a steady increase, and the 1,000gns barrier was broken, when a Benmore heifer made 1,100gns at the October Sale of 1972.  Achnacloich also enjoyed a much improved trade, selling to 425gns for the two–year old heifer Dosan Ruadh Bheg 14th, and the yearling heifer Cuailean 36th going for 375gns.  At the Bull Sale the following Spring, the well-bred yearling bull, Seumas of Glenforsa (6277), a son of the excellent Seumas of Douglas, joined the Achnacloich Fold for 950gns.  This young bull was to prove highly successful within the Fold.

The October Sale of 1973 saw several heifers bought for export to New Zealand.  Proiseag Ruadh 19th, Malda 23rd, Proiseag Ruadh 21st and a very good Princess Og 32nd of Achnacloich.  A well–bred black heifer Dosan Dubh 5th of Achnacloich fetched 500gns at the Autumn Sale of 1975 and went all the way to Devon to join the Iddelsleigh Fold of Mr Rosenberg.

The Highland Breed lost one of its most dedicated supporters with the death of Mr Thomas Ernest Nelson in the Autumn of 1977.

The Highland Fold was to continue under the guidance of his widow Mrs Jane Nelson and dedication of the Manager, Mr Archie Burnie, who had taken over the managerial position from Duncan MacNab in 1963.

Archie put the Fold back in the spotlight at the Spring Sale of 1978 with the very stylish Dosan Og 40th of Achnacloich.  The judge of the day, Mr Andrew Morrow, said: “She showed a lot of character and breeding and was of the right Highland type, and not over fat.” She was sold for 600gns to Johnny Brown of Ardanaiseig Estates, Kilchrennan.

Black heifers were to feature at the October Sale of 1978, selling to 700gns, for Proiseag Dubh 7th of Achnacloich to R. H. Jane, Monksmoor, Devon, and Malda Dubh 6th of Achnacloich, for 360gns to R. Howard, Berkshire.

The Spring Sale of 1979 saw the purchase of the big red bull, Kennapole of Rothiemurchus  (6759) for 1,200gns.  This bull was bought to inject a little more size into the Fold. Their female Champion on the day, Banarach Mhor 46th of Achnacloich was to leave the ring unsold at 425gns. 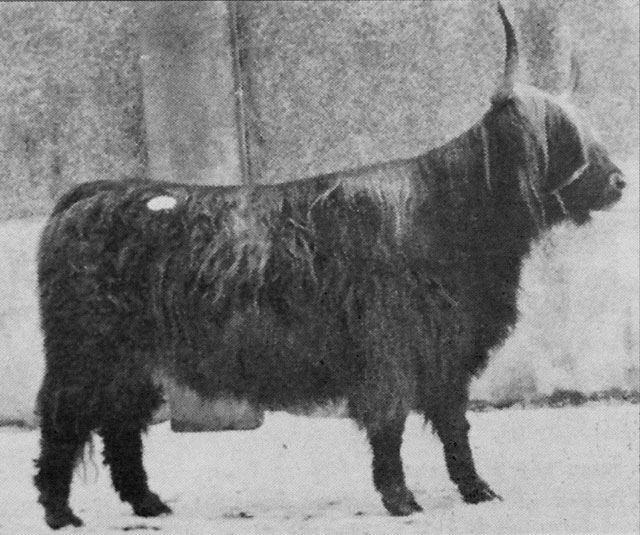 In 1980, a daughter of Seumas of Glenforsa was to be awarded the Female Championship; Neoinean Ruadh 37th of Achnacloich joined the Aigas Fold at Beauly for 600gns.

A grandson of Diarmid of Achnacloich (5759) was to join the Fold in the Spring of 1983.  Prionnsa 4th of Leys (6792), having been placed 1st in the senior bull class went on to be Champion at the Sale and was purchased for 1,450gns.  The Leys Fold were to provide Achnacloich with another Champion by selling Jock 25th of Leys for 1,000gns.  This son of Prionnsa 4th of Leys was used successfully for several years and was subsequently sold on to the Glengorm Fold, Isle of Mull.

During this time the demand from the Continent for good Highland Cattle was gathering momentum.  One of the first to go from the Achnacloich Fold to Germany was Runnag of Achnacloich (7024), bought by Herr Walter Dill for 530gns.  This son of Kennapole and out of the good Princess Ealasaid family contributed much to the establishment of the Highland Breed in Germany.

Herr Dill was to make further purchases at the Autumn Sale of 1985.  Neoinean Dhonn 15th and Neoinean Dhonn 16th of Achnacloich were both bought for export for 480gns and 600gns respectively.

At the February Bull Sale the following year, Mr Tom Muirehead bought the highly successful Uarras of Achnacloich, a son of Prionnsa 4th of Leys, for his Corriemuckloch Fold.  A daughter of Uarras was to set a new female record for the Breed at the October Sale of 1990, when the 1st Prize two–year old heifer, Liliann 15th of Corriemuckloch (32328) sold for 8,000gns to Leon Van Tongeren.

With Mr Angus MacGillivray now in charge of the Achnacloich Fold, the Show Ring was to feature once more.  For generations the MacGillivray’s had been prominent in Highland Breed circles. His father, Angus had been in charge of the Department of Agriculture’s long established Glenforsa Fold on the Isle of Mull.  Angus was to further develop his predecessor, Archie Burnie’s good work and bring it to the fore at the Dalmally Show on the 6th of September 1986. The outstanding two–year old heifer, Malda 47th of Achnacloich, daughter of Prionnsa 4th of Leys, was placed overall Show Champion.

Further offspring of Prionnsa’s were to feature strongly at the Bull Sale of 1987.  The 2nd Prize heifer, Neoinean Og 93rd of Achnacloich (30305) sold for 1,500gns, to the Glen Nevis Fold and the two–year old bull, Wallace of Achnacloich fetched 1,300gns. 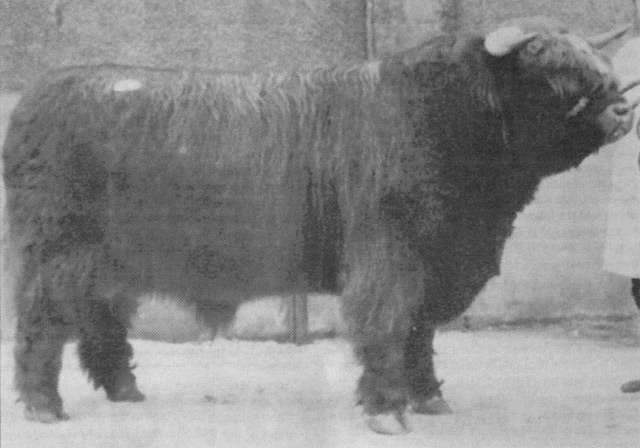 A record price for the Achnacloich Fold was also set that day when the 2nd Prize two–year old bull, Pibroch-A-Rithist, sold for 2,200gns, his Sire being Jock 25th of Leys.

The following year, a son of Jock 25th of Leys, Balloch of Achnacloich, sold for 3,000gns, to Mr I. McLaren. A Princess Ealasaid heifer was to fetch the top price of 3,800gns at the Autumn Sale of 1988.  Princess Ealasaid 34th of Achnacloich (30727), by Runnag of Achnacloich was sold for export to the Netherlands.  The unprecedented demand from Overseas coupled with the high number of new Folds being established at home was to ensure this level of demand for some time and the Fold was to continue to enjoy Sale success with the two-year old bull, Trilleachan of Achnacloich for 4,000gns to Mr K. W. W. Brown.  This bull went on to be placed 1st at The Royal Highland Show the following year.

Campbell of Pennygown (7364) was to become the new stock bull when purchased at the Spring Sale of 1990.  He joined the privately purchased Donald Ruadh 3rd of Glenogle (6909), which had bred so well in Achnacraig and the 1,000gns bull calf purchase in October 1988, Aonghas of Scourie (7487). A daughter of the great Donald Ruadh was to command the price tag of 4,800gns; Malda 55th of Achnacloich (32356) was Reserve Champion and sold to E. A. Cameron, Glen Nevis.

It was at the One Hundredth Spring Show and Sale on the 26th February 1991, that the Achnacloich Fold was to win the Centenary Bull Sale Championship, with Cailean Mhor of Achnacloich (7507), a son of Donald Ruadh and out of Banarach Mhor 53rd of Achnacloich (28978), who was by the good breeding bull Cailean 2nd of Achnacloich (6253).  Cailean Mhor sold for 10,500gns to the Balmoral Fold.  It is unfortunate to record the very short career of this bull as I am sure that had he been given the chance, he could have had a great influence on the Breed, that is if his 8,000gns son, Cailean–A–Rithist, which sold the following year, was anything to go by.

With the export market now closed due to the B.S.E. situation, the Highland Breed had to rely entirely on the home market.  The high regard in which the Fold was held throughout the Highland Breed was to ensure it maintained its position at Breed Sales throughout the nineties.  At the final sale held on 15th and 16th of February 1993, in the old West Highland Mart in Oban, the top Prize of 8,000gns was obtained by Cailean–A–Rithist of Achnacloich and not far behind was Conall of Achnacloich at 5,800gns, and Calum of Achnacloich coming in at 2,500gns.

The following year the Campbell of Pennygown’s son, Donnachadh Ruadh of Achnacloich sold to R. D. Schuster for 5,000gns at the October 1994, Inaugural Sale in the brand new Mart, South of Oban.  The 1st Prize three–year old heifer, Eilidh 31st of Achnacloich (35148), by Aonghas of Scourie, sold for 2,600gns and Neoinean Og 116th of Achnacloich (35140), by Donald Ruadh, sold for 2,400gns.  The Scottish National Winter Fair of November1994 saw the Fold exhibit at this event for the first time with the April born Eachann Ban, by Aonghas of Scourie. This much admired 465 kilos steer became Show Champion.

The sudden death of the much respected Farm Manager, Angus MacGillivray in the summer of 1997 brought a great sadness and loss to all those who knew him within the Highland Breed and beyond.  His wisdom in all aspect of the Highland, particularly the land and the Cattle, was held in high regard, and this he had carefully used in only a short time to bring the Fold to the pinnacle of success.  Always quiet and unassuming, he gave the credit for his success to his predecessors, who had laid the foundations and managed the Fold with such care for almost one hundred years.

His son, Angus, was to take the reins and follow in his father’s footsteps bringing out the Reserve Champion Female at the Autumn Sale of 1997 when Banarach Mhor 71st of Achnacloich (39697) sold for 1,800gns to Mr Peter Stubbs.

At the Autumn Sale of October 2000, not even the export ban could stop Lisbeth Plenge and Bjarne Egedal from purchasing the 3rd Prize heifer, Banarach Mhor 77th of Achnacloich (45680) for 1,600gns, in the hope that in the not too distant future, her offspring will be eligible for export to Denmark.

The latest addition to the Fold is Aonghas of Torloisk at 2,200gns, son of Iain Og 2nd of Pennygown (7744).  He joins the other Mull-bred stock bull, Alasdair Mor of Callachally (7935), by the well-known Toisiche Mor of Torloisk (7334), together with Ruairidh Ruadh of Inversnaid (8479) and completes the current stock bull list.

Angus MacGillivray’s life long interest in blackface sheep and love of the Hills lured him away to take up a position in a large sheep farm in Kintyre. The managerial position is now in the careful hands of Alex Anderson, who is putting his previous Highland Cattle experience at Rothiemurchus to good use.