The Achnacloich Fold had been in existence for just over ten years and already the stock was being keenly sought after, not only by established Fold owners, but also by new comers to the Highland Breed who could not fail to be impressed by the quality and character of the Fold.

When John F. Christie was establishing his Fold at Stockendrion on the high hills of Loch Lomond, he chose the foundation females Capleadh of Achnacloich  (8361) and Dossan 2nd of Achnacloich (8363) amongst others from well-known Folds. The Cattle from John Christie’s Fold were to contribute greatly to the development of the breed over the next thirty years with such bulls as Auchmar (3053), Colin of Inchvanik (3851) by An-Ceatharnach of Achnacloich (3639) and Fearchar of Gartlea (4113). 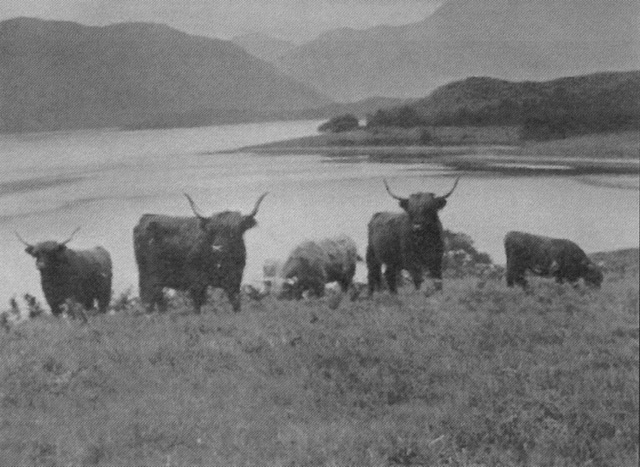 In 1920, Mr Hugh Morrison was to establish what was to become one of the largest and most successful Folds in the Country. His Ile Fold was set up with initial purchases coming from the Atholl, Balranald, Bochastle and Stronvar Folds. But it was the purchase of the former Highland Show Champion, Culnadalloch 2nd of Achnacloich (3441) along with the purchase of the outstandingly good breeding cow Capleadh X of Achnacloich (10150) that put the Ile Fold on the map. Cullnadalloch 2nd was to Sire their first Highland Show Champion in 1935, the beautifully proportioned yearling bull Fear Tagraidhile, while the Capleadh line was to bring the Fold unprecedented Show and Sale success. Other Achnacloich bred Cattle also played their part in the Ile Fold development such as the record price Uallach of Achnacloich (4475), Cailean A’Ghlinn of Achnacloich (3810) and Diarmid of Achnacloich (5759). 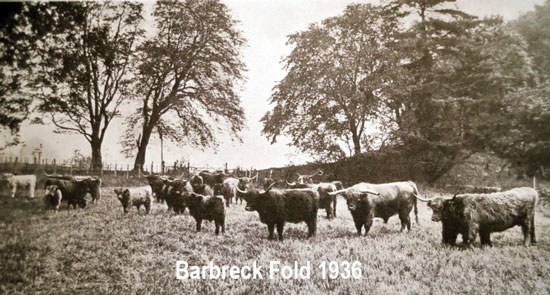 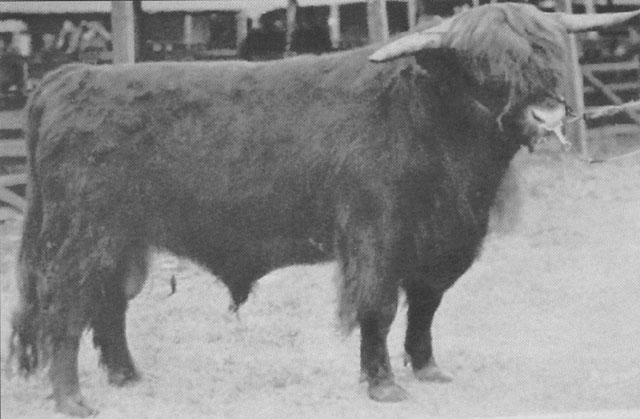 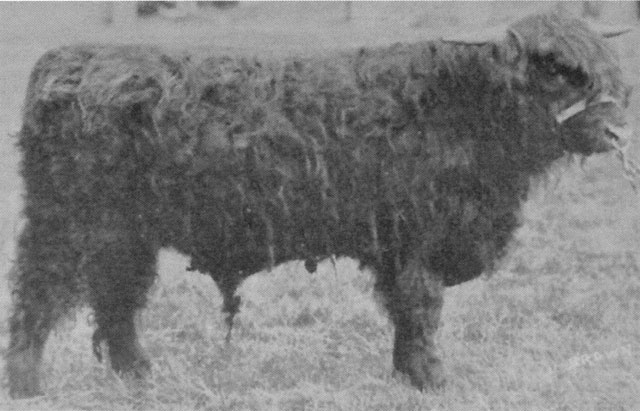 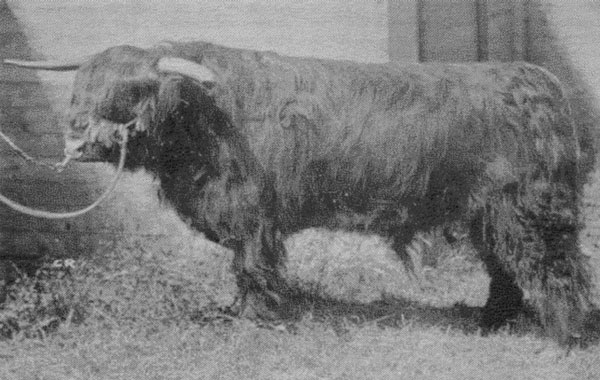 The Cuailean family was to play a prominent role in the early years of Mr Edward Lowes when he developed the Glenfalloch Fold during the early 1930’s. Cuailean XX of Achnacloich (10776) was shown with success and won 1st Prize cow at the Royal Show in 1939. She went on to breed consistently producing the much-admired bull Prionnsa Buidhe 2nd of Glenfalloch (4312). For his first stock bull, Edward Lowes chose Culnadalloch VII of Achnacloich (3809), shown with success at the Royal Show in 1935, being placed second in the two-year-old bull class.

Another Culnadalloch bull was to be chosen by Mr William Walker of Foreland, Islay, whilst establish his successful, but short lived, Foreland Fold. The bull he chose was Culnadalloch IV of Achnacloich (3670) and he also selected one of the best female at the October Sale of 1947, the two-year old heifer Sobhrach Og 3rd of Achnacloich (12600), which he purchased for 115gns. The following year, he purchased the record price bull Uallach of Achnacloich for 800gns. Unfortunately, the Foreland Fold was to be dispersed at the October Sale of 1949 following the sudden death of its owner.

The Laudale Fold belonging to Mr John A. Fletcher of Ardgour was renowned for the unsurpassed quality of the females, which were exposed annually at the Autumn Sales in Oban. Whether registered or not, they were always sure to command a premium, especially those Sired by Culnadalloch V of Achnacloich (3706), Sired by the 1929 Highland Show Champion, Culnadalloch 2nd of Achnacloich (3441). It was the Laudale bred daughters of Culnadalloch V that the famous Shorthorn breeder, Mr Duncan M. Stewart, chose when starting his Highland Folds at Fordie and Balmuick, just outside Comrie. Mr Stewart’s first registration in the Herd Book in 1946 included 19 entries of offspring of Laudale cows, all daughters Culnadalloch V.

When in February 1951 Lady MacRobert decided to establish a Highland Fold at Tarland to complement her already successful Aberdeen Angus and Friesian herds, she looked to Achnacloich for the quality and depth of character so essential when establishing a Fold. Her first choice was to be the record price Dossan Ruadh 4th of Achnacloich (13499), which she purchased for 650gns.  In the same year, Lady MacRobert purchased for 300gns another daughter of Calum Seoladair - the October Sale Reserve Champion - Neoinean Og IX of Achnacloich (13065). The beautiful Dossan Og 2nd of Achnacloich was also to join the Douneside Fold where she was to produce one of the Fold’s early stock bulls Laochan of Douneside (4932). Another highly successful line was established at Douneside with the purchase of Baravalla VIII of Achnacloich (14107), again by Calum Seoladair. To further strengthen the Achnacloich influence in the Fold, the yearling bull Baran Ruadh IV of Achnacloich was added after being placed Reserve Champion at the Oban Bull Sale in 1960. 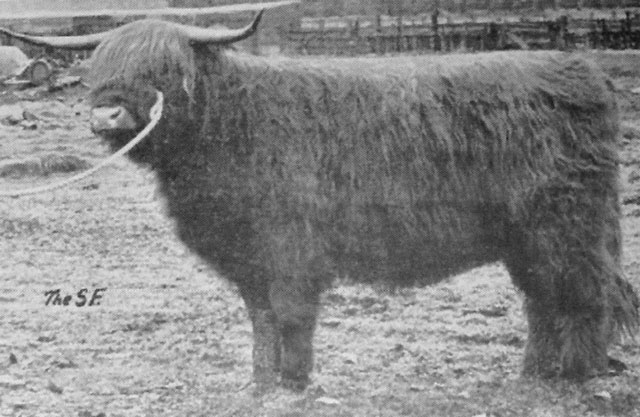 One of the Highland Breed staunchest supporters and first ever President of the Highland Cattle Society from South of the Border, Mr William Pearson Brown, developed his Easingwold Fold around Achnacloich bloodlines. It was the Capleadh family, which brought him his greatest triumphs, with Capleadh Ruadh 6th of Easingwold winning Breed Champion at the Royal Show 1963 and 1964, Sired by Uallach Ile 7th (5606), whose Sire was Uallach of Achnacloich (4475) and the Dam line traced back to Capleadh V of Achnacloich (9008).

It is not only in the British Isles but also in every Country Overseas where the Highland Breed has become established that you will find Achnacloich breeding. In 1937, Mr H. E. Gildemeister bought Highlanders for his Ranch 12,000 feet up in the Peruvian Andes. That same year, two Achnacloich heifers were shipped to Ontario for Mr S Pettit. Today, Achnacloich bloodlines are found in the U.S.A., Canada, Denmark, Sweden, Holland, Germany, Austria, Belgium, Ireland and Australia, where Neoinean Og 101st of Achnacloich (31721), a daughter of Jock 25th of Leys (7129) was placed Champion at the Royal Melbourne Show in 1990.

One cannot over estimate the contribution to the development of the Highland Breed that all the aforementioned Folds have made over more than half a century. They and many others built the foundations of their Folds from the families, which made up the Achnacloich Fold. Each family display its very own particular and distinctive characteristics. My own Fold today is made up predominantly of Dossan Ruadh’s and they are as true to type today as they were all those years ago.

It was at a commercial sale at the Livestock Mart in Stirling in May 1982 that Sir W J D Roberts Bt decided to dispose of all his young Highland stock. There was no catalogue so the heifers could not be identified and one just bid on what one fancied. Both, Douglas and Angus Estate and Argaty Estate bought all the best three-year old females. There was a pen of twelve yearling heifers in which one particularly stood out, there must have been at least eight inches of hair hanging from her ears and a dossan that reached the end of her big muzzle; a somewhat straight horn indicated that when mature the head would be quite majestic. I bought her and once home, her tattoo verified what I had hoped for, Dossan Ruadh 9th of Strathallan (29016). In her lifetime she ran with seven different bulls but every one of her offspring had all the Dossan Ruadh’s characteristics. I have always regarded this as a sure sign of purest Highland Breeding and the same identifiable characteristics can also be found in the Baravalla line. 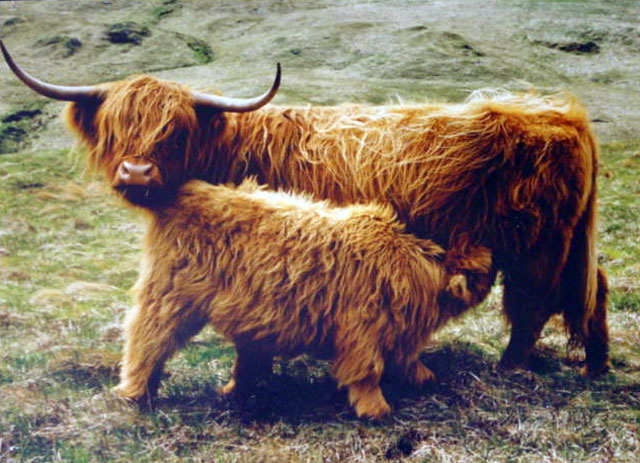 I recall thirty years ago visiting the Douneside Fold and it was the descendant of Achnacloich Baravallas’ which stood out with their wide heads, broad muzzles and strong bones – they all looked like Cattle that would have long productive lives. Some of the descendants of the Douneside Fold make up the Gartchonzie Fold, situated near Callander, where the Baravallas, regardless of their age, can all very easily be recognised.

The Nelson’s certainly knew what they wanted the day they attended the Kilberry Fold dispersal in 1928 where they bought their Baravallas, as did many others.   Douglas and Angus Estate, Mr Morrison of Islay House, Miss Dunlop of Quothquan, Near Biggar, Lord Invernairn of Flichity and Mrs Hall of Killean in Kyntyre, all went away with the best Baravallas.

Fifteen years ago, I had the pleasure to judge the Highland Cattle classes at the Doune and Dunblane Show at which the Achnacloich Fold was exhibiting. My Champion on the day was Cuailean 68th of Achnacloich – a true Highlander in every sense of the word – character, femininity and structurally correct – a typical example of this line and so true to type.

The true worth of a stockman should never be judged by the number of rosettes and Prize tickets hanging in the kitchen or the barns nor should he be judged on the size of the feed-bucket used. A stockman true worth lies in his instinctive ability to recognise the individual traits within his particular Fold and to blend them with the characteristics he considers to be lacking. The aforementioned is a textbook example of good stockmanship.