Having had a life long interest and fascination for the Highland Breed, I took it upon myself to compile a short history of the Achnacloich Fold to commemorate their Centenary.

Little did I realise as I commenced my research almost fourteen months ago the enormity of the task, which I had undertaken. I have had to rely on information from the Highland Cattle Herd Books and reports of Shows and Sales in the Agricultural Press, as unfortunately many of those who were closely associated with the Fold are no longer with us. Many of the records I studied dated back over one hundred years and were on occasions far from complete. However, these have enabled me to re-create the progress through the decades as accurately as humanly possible.

I hope that this insight into the famous Achnacloich Fold will give Highland Cattle enthusiasts everywhere useful information regarding breeding policies together with an understanding of bloodlines and how these have evolved over the years to give us many of the Highland Cattle Folds we know today.

I do not recall what age I might have been the first time I travelled West on the road to Oban and viewed the Cattle by the Loch side, but even today I cannot pass Achnacloich without a sense of anticipation about the Cattle I might see as I drive below the railway bridge and overlook the lower reaches of Loch Etive and the high Hills of Mull beyond. 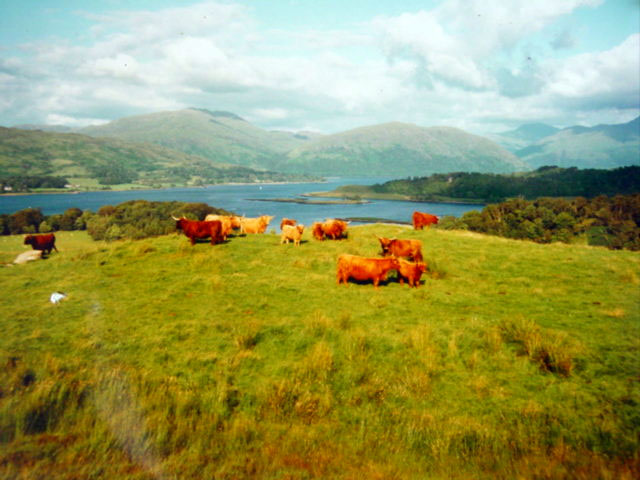 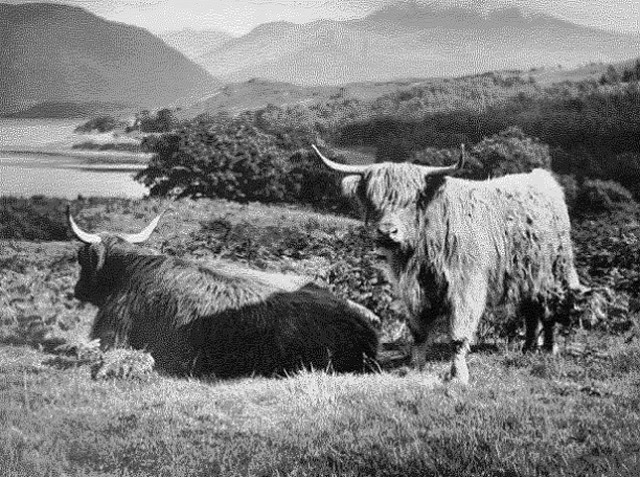 Sweetheart and Beauty on the hill above Loch Etive

The Highland Tradition on the Shores of Loch Etive

The Achnacloich Estate first came into the hands of the Nelson family around 1892.  At that time Mr Duncan Sinclair was the tenant of Culnadalloch, one of the farms on the Estate where he had been successfully breeding Highland Cattle for many years.

His first registration appears in the second volume of the Herd Book published in 1887, in which he registered the bull Gille Buidhe Og of Ormaig (591), born July 1874.  This bull was bred by Mr James Campbell, Ormaig, by Kilmartin.  He was shown at the Highland and Agricultural Society’s District Competition for Lorn and Nether Lorn in 1879, gaining First Prize and a silver medal.  The Sinclair family had further success when, in 1899, their homebred bull Mac-A-Mhuillich (1393) took First Prize at the Highland Show in Edinburgh.  He was shown by his owner, Mr Donald Graham of Airthrey c.i.e, Bridge of Allan

The Highland stock from Culnadalloch also featured at the Highland Cattle Society’s Oban Sales.  At the Spring Sale of 1900, Donacha Heanachinn (1507) and Buachail-Eite 2nd (1471) were placed 2nd and 3rd respectively in the yearling bull class. 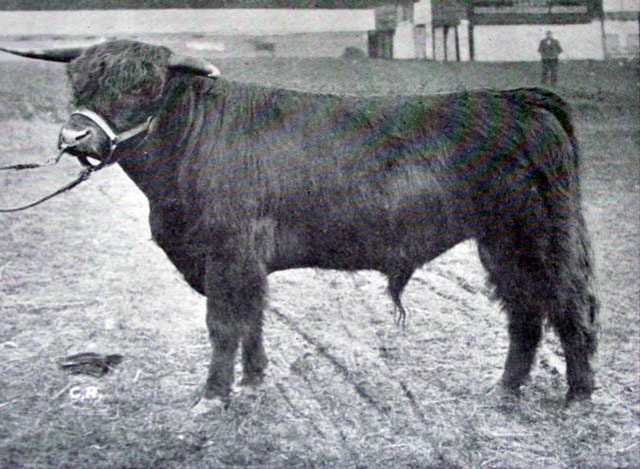 The responsibility for the early development of the Highland Fold was in the hands of Mr Peter Bruce, the farm manager who, for almost 40 years, selected and developed all of the various female families, which are still to be found in the Fold today.

Cuailean of Achnacloich (6915), born 18th Feb 1903, was the first of this well-known family to be registered in the Fold. Her Dam, the dun coloured Corrichean 2nd of Canna (6486) was from one of the oldest Folds in existence on the Isle of Canna, belonging to Mr Robert Thom Cuailean of Achnacloich was to bring the Fold early success at the Oban October Sale, with Cuailean XVI  (10558) and Cuailean XVIII of Achnacloich (10604) being placed Reserved Champion in 1932 and 1933 respectively. 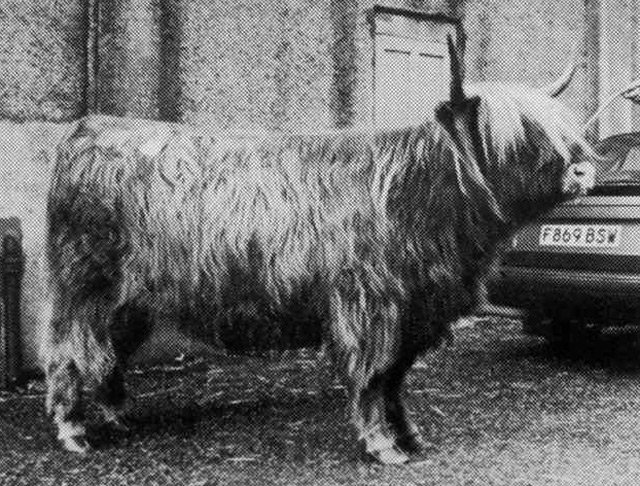 The Ardanaiseig Fold situated on the west side of Loch Awe was to provide Achnacloich with one of the best-known female lines in the breed when they bought Capleadh V of Ardanaiseig (7144). The origins of this particular line can be traced back to the Fold of Poltalloch belonging to the Right Hon. Lord Malcolm, the first Vice President of the Highland Cattle Society.

At the Spring Sale of 1932, a son of Capleadh X of Achnacloich (10198) supplied the Fold with its first ever Bull Sale Champion, Ossian of Achnacloich (3672), whose Sire was the highly regarded stock bull Ossian V of Southesk (3566), who in turn was Sired by one of the great bulls of his generation, Ossian Ban of Atholl (3176).

The Ardanaiseig Fold was to supply yet another successful female line with the purchase of Riabhach Lurach of Ardanaiseig (4849) whose great grand daughter, Mairi VII of Achnacloich (9549), produced the outstanding bull, Culnadalloch 2nd of Achnacloich (3441), Champion at the Highland Show in 1930.

The highly regarded Bochastle Fold owned by Mr John Stewart was also to play a part in the foundation of the Fold.  The Proiseig family was introduced with the purchase of Proiseig 3rd of Inverloclarig, which traces back to Proiseag Riabhach 2nd of Bochastle (3852), which in turn can be traced to the black Highland Show Champion Cow of 1882 and 1885 Proiseag Dhubh (783).  It was this particular family, which preserved the black strain in the Achnacloich Fold, when in 1939 Mr T. E. Nelson bought the greatly admired 15-year-old cow, Proiseag Dubh (10064) from Mr Fletcher of Laudale.  She was bred by Mr John Stewart of Bochastle and as it turned out, she was carrying a black bull calf, Prionnsa Dubh of Achnacloich (4136).  Had it not been for this fortunate purchase, it is highly likely that black in the Highland Breed would have become extinct.

The Baravalla family has been highly successful within the Fold.  Owing to the death of Colonel Campbell of Kilberry, the long established Kilberry Fold was dispersed on the 13th of October 1928.  It was there that the Nelsons laid the foundations of the Baravalla line in the Achnacloich Fold with the purchase of Baravalla Bhoidheach 3rd (9148).  At the Bull Sale of 1948, Uallach of Achnacloich (4475) was placed Champion and sold for the record price of 800gns to Mr W Walker, Foreland Isle. His Dam was Baravalla 2nd of Achnacloich (11275) and he was Sired by the outstanding stock bull, Calum Seoladair of Smaull (4245), who spent a total of 15 years at Achnacloich.

The well-known Banarach and Noinean families both have their origins in the Stronvar Fold of James Carnegie.  His highly regarded Lady White line has left a lasting impression on the Achnacloich Fold. 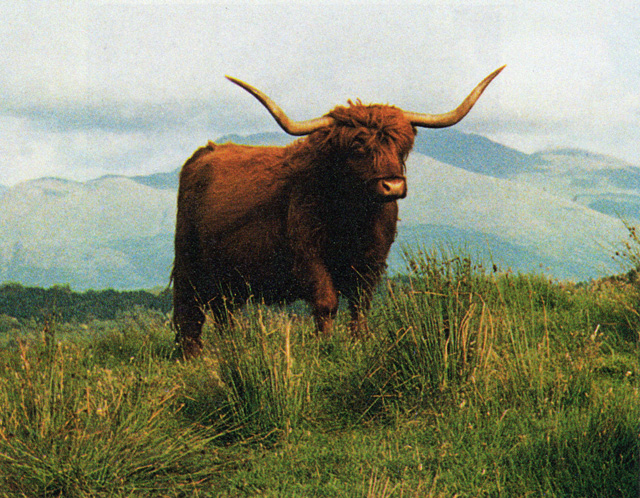 Righ of Morven (26057), Sire of Lady White IV of Stronvar (9189) was the start of the Banarach line and Lady White V (9964) was the foundation of the Noinean families.  This particular Stronvar line traces back to the dun-coloured cow, N’Odhar Mhor of Stronvar, born 1886, which in turn was Sired by the light dun Benmore bred bull Comhall (119), who won 2nd Prize at the Highland Show in 1882.

Banarach breeding came to the fore in 1991, when the three-year old red bull Cailean Mhor of Achnacloich (7507) was awarded Male Champion.  The Noinean strain is well represented in the Fold today and over the years have produced good bulls such as Cathach Riabach (6254), stock bull at Torloisk for many years and also the well known Pibroch of Achnacloich (6979)

One of the most distinctive female bloodlines within the Highland Breed must surely be the Dossan Ruadh’s.  Dossan of Achnacloich (8614), born 10th February 1910 was the first to be born at Achnacloich, her Dam Dosan Dhearg of Duntulm (6783) was bred by Mr John McDonald, Glenbrittle, Isle of Skye.  This line traces back to a cow bred by the Earl of Southesk, Sired by the bull Rossie (456) born 1883. With her long flowing hair, wide set of horn and broad muzzle the Dossan Ruadh’s epitomise all that is best in a Highland female. 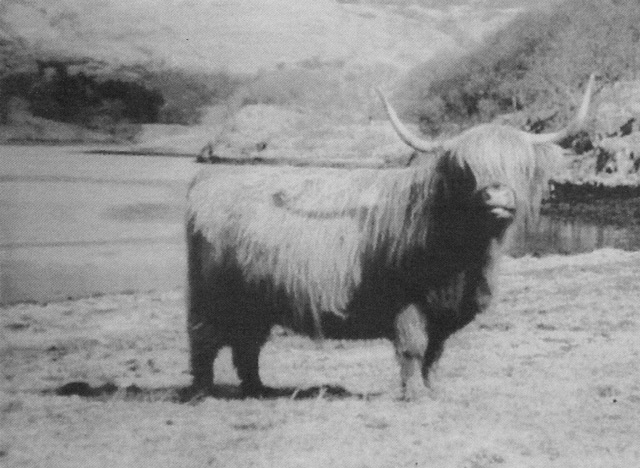 The Sobhrach Og lines have their origins in the Dossan Ruadh family.  They have also held their own in the Show and Sale ring.  Sobhrach Og V of Achnacloich (13504) took 1st Prize senior heifer and sold for 210gns, to Major C.J. Shaw, Newhall, Connon Bridge.  At the Spring Sale in Oban in 1980, Naiose of Achnacloich, a son of Sobhrach Og 62nd of Achnacloich sold to the Woodneuk Fold.

It was the Earl of Southesk’s renowned Fold at Brechin that went to establish the Princess bloodline at Achnacloich.  The offspring of Princess Vala 2nd of Southesk (9055) went on to produce the highly regarded Princess Ealasaid family and the Princess Ruadh line, both of which trace their origins back to the black Ardtornish bred Valentina (3842) born 1896.

It was at the Royal Highland Show of 1961 that Princess Ealasaid 6th of Achnacloich (17575) came right to the forefront securing the Supreme Championship, her Sire was the 1953 Oban Bull Sale Champion Coirneil Ruadh of Mingary (4771).

At the Royal Highland Show in 1980, where I had the honour of judging the Highland Cattle section, I placed as Male Champion and Reserve Overall Champion the Leys Castle stock bull, Hamish of Auchnacraig, whose Dam was Princess Ealasaid 11th of Achnacloich (20777) and was Sired by Ben Ledi of Scone Palace (6152), whose Dam was Princess 3rd of Douneside (21070), which highlights the Achnacloich breeding on both sides. 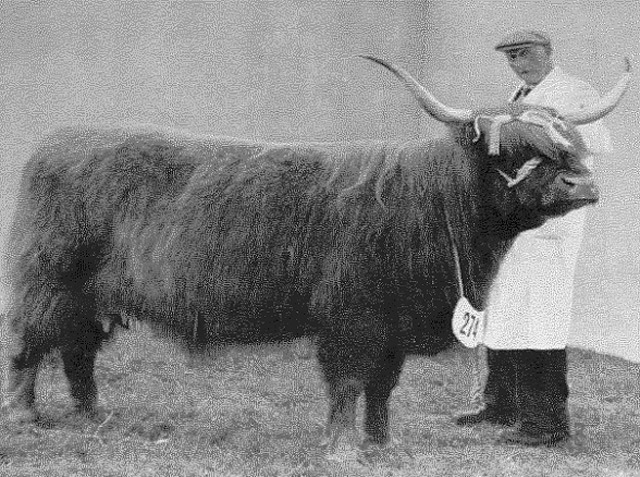 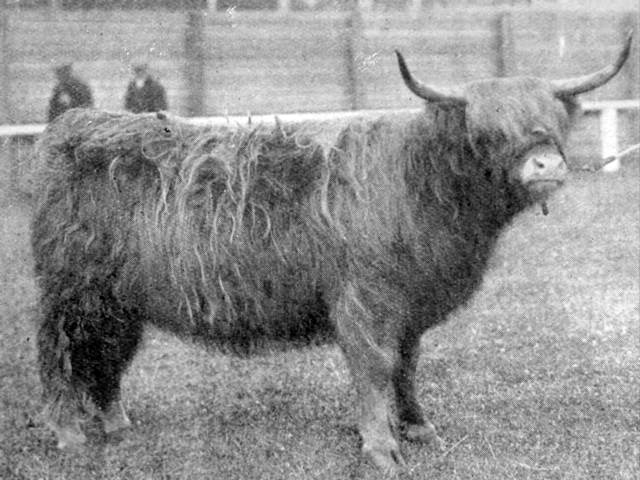 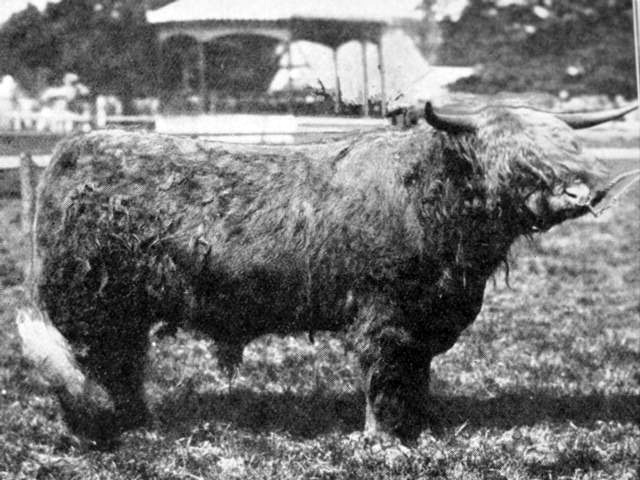 Note: This article is © Copyright of Angus R. Mackay. It has been reproduced with his permission. Photographs in the article are courtesy of The Scottish Farmer, Mr Douglas Lowe, and the Highland Cattle Society