It is interesting to compare the pedigree of this year’s 2001 black champion Gille Dubh of Craigowmill with that of Victor XXII (1600) in 1901. The Bochastle’s Proiseag Dubh of Achnacloich (13068) breeding found in both the sire and dam of Gille Dubh on his sire’s side. Proiseag Dubh 7th of Achnacloich (24532) was the dam of Tearlach Dubh of Balinoe (7031) who in turn was the sire of Gille Dubh of Ardeonaig (7517) who sired Gille Dubh 2nd of Rigg (8603), whose dam, Princess Dubh 7th of Rigg (36025) traces through the black Pollok line to Una Dubh 2nd of Woodneuk (20451), whose grand dam was Una Ruadh of Smaull (16206). This particular line originated in 1941 with the unregistered cow of Torliosk fold; she was bred Mr. MacGugan of Barahormid, Tayvallich. Gille Dubh of Craigowmill’s great grand sire the well-fleshed Lasgaire Dubh of Millerston (7014), traces through the same female line. It is interesting to note the second last black female champion at Oban Sale is of this Una family. Una of Millerston (27230) was placed champion by judge Donald MacGillivray at the spring sale in 1982, by far the best black heifer seen for many years and arguably the finest heifer ever to come out of Millerston. 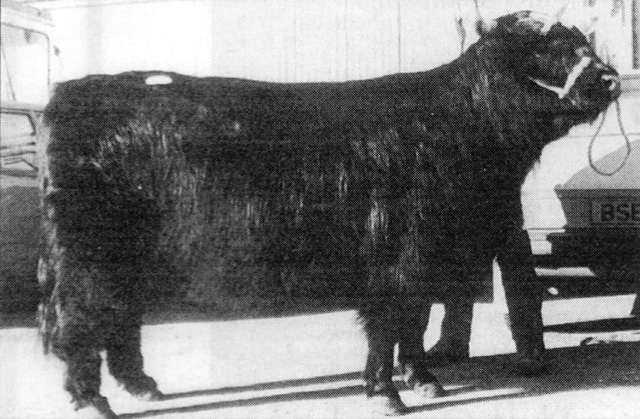 When we look at the dam’s side of our recent champion bull, there is black breeding on both sides. With his grand sire Eilean Dubh of Craigowmill (7603), one of the best fleshed black bulls of recent times, that trait probably coming from his sire, the red Jock of Benmore (6800). Eilean Dubh’s dam was Black Bess 4th of Woodneuk (25530), a cow of great scale. This line originated from the island of Islay and the Department of Agriculture’s Ballinaby fold. Sine Dubh of Ballinaby (14479) registered in 1944 was by Black Prince of Laudale (4047), who in turn was one of the great Prosaig Dubh linefrom Achnacloich.

Victoria 3rd of Craigowmill’s (40471) dam, Xanthippe of Chanaidh (31136) is from the long established fold on the Isle of Canna. She was  sired by Conn Dubh of Lakeside (6858), an English bred black bull used extensively on the Isle of Canna in the early 1980’s. His grand sire was yet again another Achnacloich  bred bull Maclain Dubh (5761), whose dam was none other than Proiseag Dubh of Achnacloich (13068). Indeed it was this outstanding black Achnacloich cow which helped to establish the present black line on the Isle of Canna with the purchase of her son Prionnsa Dubh 2nd of Achancloich (5335) for 100gns in 1958.

You do not have study carefully the pedigree of Gille Dubh of Craigowmill to ome to the conclusion that had it not been for the Nelsons and the Achnacloich fold developing the famous Proiseag Dubh line, it is unlikely there would be any black Highland cattle of merit in the Highland Breed today.

Are we going to have to wait another one hundred years to see again a Black Highlander lift the Premier Award at the Oban Shows and sales? I think not.

It is not uncommon to see good black females lifting the First Prize ticket, or even the Championship at our national or county shows. Mrs D. Brown’s Una Dubh 2nd of Cir Mhor (44717) is a typical example, as was Donald MacNaughton’s First Prize 2-year-old bull at the Oban sale last year, Calum Dubh of Rannoch (8827), which made the top, price of the day at 3,100gns.

According to the list of registered stock bulls in the latest breed journal there are almost sixty black bulls in use in the United Kingdom alone. There are also several fold specializing in breeding black highlanders.

The Balinoe fold of Miss Roberton’s in Sutherland has used only black bulls for the past twenty years. Mr. C.K.M. Stewart, Brechacha fold, has for many years developed not only high quality black cattle, but also white, dun and brindle highlanders.

The folds at Ardalanish and Cailaich on the Isle of Mull are producing some excellent black cattle, as is the long established Inver fold on the Isle of Jura.

In the South the Clemlawrie, High Netherscales and Ellerdine folds amongst others bring good black highland cattle to the fore. I would wage that we will see more black Highland Champions at Oban Sales in the not too distant future. As for colour, it’s only fashion; a good beast is never a bad colour. 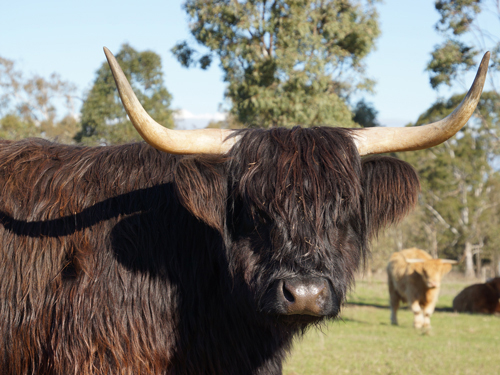 One hundred and fifteen years later there are black highland cattle in Australia, and with dedicated breeders they will continue for another 100 years ... and centuries to come.