It was Osgood MacKenzie who was born in 1842 that commented upon the decline in the numbers of black highland cattle in his book “A Hundred Years in the Highlands” (1921). He wrote that in his grandfathers time “no colour was considered right for highland cattle but black”. The great thing then was to have a fold of black cows. No one would look at the reds, yellows, cream and duns, which are all the rage nowadays.

He further stated that “though the blacks have since become unpopular, I have been told by the very best old judges of highland cattle that there is nothing to beat the blacks for hardiness and that the new strains of fancy – coloured cattle are much softer and have not the same constitutions”. So what brought about this dramatic decline in black in favour of other lighter colours? In a word – fashion, and regrettably, there is no greater dictator of fashion than the show ring.

From 1822 onward the Highland and Agricultural Society of Scotland was actively encouraging live stock improvements by awarding premiums at its own show and at agricultural shows throughout the land. In this way, breed standards were set. As it is almost impossible to visually assess highland cattle for their most unique attributes; hardiness, longevity, and mothering ability, there were to be visually assessed as with all other breeds of cattle by the judges of the day on conformation and size. Black was no longer looked on favourably. Thus the Victorian ideal of what a Highlander should be like was set. The Highland and Agricultural Society held its first show in Edinburgh in 1822. Mr. James Dickson, Dunse, exhibited as extra stock, the following animals:

A blue or dun four-year-old heifer of beautiful form and great points, and a very remarkable brindle heifer, two and a half years old with its mother, bought in calf at the September Falkirk Tryst of 1819. At the same show in 1823, John Graham of Balagan was awarded an honorary medal for his zeal in bringing from a distance six 4-year-old heifers bred Mr. Campbell of Islay. The heifers referred to would have been walked to the show un-haltered. At the show held in Glasgow in 1826, Sir John Maxwell of Pollock, Baronet exhibited two 4-year-old heifers, a black and a brindle, bred by Mr. McNeill of Colonsay that were considered by many judges as the best stock exhibited at the show; an honorary medal was awarded for this lot. 1828 saw special premiums offered for the first time and classes were introduced. So began the tradition of showing livestock at the Highland Show and County Shows throughout the land. It was at the Edinburgh Highland Show of 1884 that the first meeting was held with a view to forming the Highland Cattle Society and to publishing a herd book. Most of the prominent fold were represented at the show: 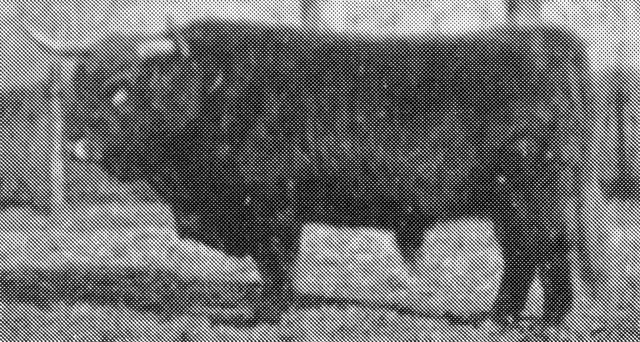 One writer described Calum Riabhach of Atholl (82) as, “a bull built on a massive scale. He had a noble masculine countenance, a long deep and wide frame, sappy skin, and for all his size and weight he carried himself well up in years with a springy step”

There were only 3 black bulls entered and two black cows. When one reads the reports of those early shows, the term “an animal of great scale” is continually used to describe the premier exhibits, and as it was then so it is at most shows today that the largest find themselves at the top if the line. The show ring was dictating “Big is Best” and the more traditional, compact dark coated Highlander was out of favour. Now fashionable were lighter coloured cattle with greater scale found in the Central and Eastern Highlands. Gradually in time they would influence the size, shape, and colour of the entire Highland breed.

When one looks at the entries in the first herd book published in 1885, whih contained bulls only, there were 561 in total, all of which were born before the first of January 1884. The colours were as follows: Black 198, Red 127, Brindle 94, Yellow 91, and Dun 51. If we were to compare those figures with the herd book in which the Champion Ardtornish bull Victor was sold, published in 1902, it highlights the rapid decline in the number of black bulls registered in less than twenty years: Black 7, Red 41, Brindle 47, Yellow 45 and Dun 4. The only folds entering any number of black females were Ardtornish with 11, Scorry Breck 4, Bochastle 2 and Applecross with 3. All the other leading folds such as Kilberry, Stronvar, Southesk, Farr, Poltalloch, and Kinlochmoidart, etc. now had fold which were entirely without black cattle. Red, yellow and brindle were predominant. A further dramatic decline was to occur during the 1920’s-1930’s, not only in the number of the black cattle but also the brindle and dun cattle were now no longer in fashion. In volume of the herd book published in 1937, 197 bulls were registered. There were no black bulls and only three black female registrations. 1 each from the Earl of Home (Douglas), Mr. John Stewart, Milton (ex-Bochastle) and Mr. A.K. McDougall, Logan, Stranraer. This almost total exclusion of the dark coloured cattle in favour of the light reds and yellows can be partly explained by the dramatic rise in popularity of the cross-Highland cow (i.e.: Shorthorn bull with Highland cow) which, over a twenty year period had replaced many a pure bred fold of Highland cattle in the west Highlands and north of Scotland. The preferred Cross-Highland type was without a doubt for the light roan or yellow coloured cattle with soft smooth hair, which were considered to be better mothers producing an abundance of milk.

This unprecedented demand for the hardy cross Highlander was to have a detrimental effect on the number of purebred females being registered in the herd book, and further reduced the genetic diversity within the Highland breed.