The Highland Cattle Society of Scotland was founded in 1884 and they published a Breed Standard in the first Herd Book in 1885.

However, over seventy years earlier in 1811 a gentleman by the name of James Macdonald wrote the following description in his book General View of the Agriculture of the Hebrides...

A bull of the Kyloe* breed should be of a middle size, capable of being fattened to fifty stone avoirdupois.

His colour should be black (that being reckoned the hardiest and most durable species), or dark brown, or reddish brown, without any white or yellow spots. His head should be rather small, his muzzle fine, his eyes lively and prominent, his horns equable, not very thick, of a clear, green, and waxy tinge; his neck should rise with a gentle curve from the shoulders, and should be small and fine where it joins the head; his shoulders moderately broad at the top, joining full to his chine and chest backwards, and to the vane of his neck forwards.

His bosom should be open, his breast broad, and projecting well before his legs; his arms, or fore thighs, muscular, and tapering to his knee; his legs straight, well covered with hair, and strong boned. His chine or chest should be so full as to leave no hollows behind his shoulders; the plates strong, to keep his belly from sinking below the level of his breast. His back or loin should be broad, straight, and flat; his ribs rising above one another in such a manner that the last rib should be rather the highest, leaving only a small space to the hips or hooks; the whole forming a roundish, barrel-like carcase.

His hips should be wide placed, rounded or globular, and a very little higher than the back. His quarters (from the hip to the rump) should be long and tapering gradually from the , hips backwards, and the turls, or pot-bones, not in the least protuberant; his rumps close to the tail; his tail itself should be thick, bushy, well haired, long, and set on so high as to be in the same horizontal line with his back. His general appearance should combine agility, vivacity, and strength; and his hair should be glossy, thick, and vigorous, indicating a sound constitution and perfect health.

For a bull of this description Mr Macneill of Collonsay lately refused 200 guineas; and for one of an inferior sort he actually received L. 170. Sterling. Mr Macdonald of Staffa bought one, nine years old, at 100 guineas.

It is unnecessary to enter in detail upon a description of a Kyloe, or West Highland, or Hebridian heifer, as the above, with some very obvious modifications, answers for animals of both sexes.

* The term Kyloe is probably a corruption of the Gaelic word which signifies Highland, and is pronounced as if spelled Kaêl by the common people.

Strangers, on visiting the Western Isles, cry out against the folly of the people in keeping cattle of a small breed; when by changing it for the Irish, or the Lowland Scotch, they might greatly enlarge the carcases of their stock. But this is often a rash opinion.

The great question in Hebridian grazing and rearing, is, what breed will best answer the land and climate, and what size can be most easily and securely raised at the smallest expense? 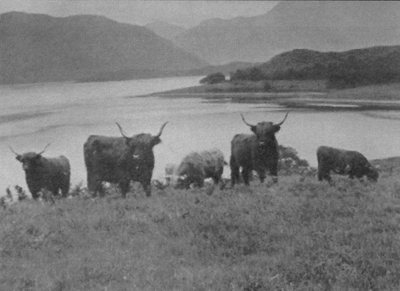 Heavy cattle cannot seek their food in bogs and marshes, leap over ravines, rivers, and ditches, or scramble through rocks, and in the faces of cliff; and precipices, like the present breed, which is almost as active and nimble as a Chamois goat; nor can the poor Hebridian tenant afford to breed any stock which is not proof against the inclemency of his rains and storms all the year round.

It is infinitely safer for  him, therefore, in the present imperfect state of his agriculture, and perhaps even at all times, and in all circumstances of his country, to rear too small, than too large a breed of cattle; and to improve his indigenous, hardy, excellent species, than to import from , other districts such breeds as may be indeed profitable for their circumstances and climate, but which would probably perish in the Hebrides, without more attention being paid to them than, in his situation, he can conveniently afford.

A moderate size is accordingly preferred by all skilful graziers, i.e. bullocks or stots, which, fattened at the age of five, weigh 3O—36 stone avoirdupois, and heifers which weigh, at the same age, 24—30 stone. This rule, no doubt, admits of considerable latitude of application ; and while the weight or size now specified answers extremely well for the common average of the best breeds used by gentlemen farmers in Islay, Mull, Coll, Tyree, and Skye, it may be deemed an under size on the lands occupied by the proprietors of Islay and Collonsay, and by some of their people, who have lately introduced green crops, and, by a skilful mode of managing their lands, can afford food and shelter for their cattle in abundance during the whole year. Those gentlemen may raise the native breed (still, however, preserving the same identical genus and species of cattle,) to the weight, when fattened, of from 34 to 42 stone for their bullocks and heifers.

Mr Campbell of Shawfield had, accordingly, in 1807, a heifer from his farm in Islay fattened for a few months at Pencaitland in East-Lothian, and slaughtered at Haddington, which weighed 63 stoneavoirdupois. Mr M'N'eill of Collonsay sold several score of bullocks and heifers, lean, this season, (1809) at Dumbarton, at L. 12 a-head, which sum, at the average of eight shillings per stone, gives a weight, lean, of 30 stone. 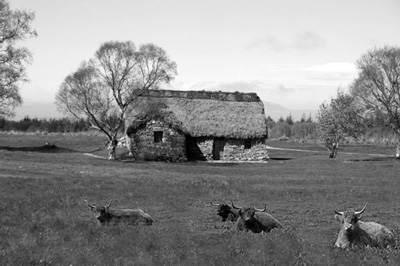 On the other hand, the average weight above mentioned, as perhaps the best suited, upon the whole, to the actual circumstances of the Hebrides, is considerably too great for the lower order of farmers, and still more so for the numerous classes of sub-tenants and cottars. The miserable accommodation which these can afford, will scarcely suffice for cattle of half the size of those reared by the proprietors of the improved islands, and by their richer tenants, bullocks of 20 stone weight, and heifers of 18 stone, are, therefore, the heaviest which they can bring lip; and there must be a considerable change in their situation before they can venture upon introducing into their general possession a heavier or better breed.

What is true of the lower classes of tenants in the improved Southern Islands of Islay and Collonsay, holds as to the general run of people in the Northern Isles. The Isles of Skye, and of Mull, possess breeds of cattle much better adapted to their present situation than larger breeds would be; and that they are capable of being improved both in point of form and of size, by selections from among themselves, and by better feeding, appears evident from some particular stocks or herds on those islands, compared with their general average. It is not, therefore, necessary to dwell upon the consideration of the breeds of those Northern Isles, which indeed are besides sufficiently well known to the public, both by character and bv name.